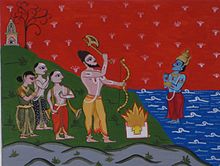 Pre-historical archaeological findings include dolmens of the Neolithic era in the Marayur area in Idukki district. They are locally known as “muniyara”, derived from muni(hermit or sage) and ara (dolmen). Rock engravings in the Edakkal Caves, in Wayanad are thought to date from the early to late Neolithic eras around 6000 BCE.Archaeological studies have identified many Mesolithic, Neolithic and Megalithic sites in Kerala. The studies point to the indigenous development of the ancient Kerala society and its culture beginning from the Paleolithic Age, and its continuity through Mesolithic, Neolithic and Megalithic Ages. Foreign cultural contacts have assisted this cultural formation; historians suggest possible relationship with Indus Valley Civilization during the late Bronze Age and early Iron Age.

Mythology in Kerala
Ancient period in Kerala
Sign into your account
or
Login with Facebook
Login with Google
Create an account
Reset Password
Register here! Forgot Password? Back to Login Return to Login
Need Help? Chat with us
Start a Conversation
Hi! Click one of our member below to chat on Whatsapp
The team typically replies in a few minutes.
Kerala Model Home Plans
KMHP Support